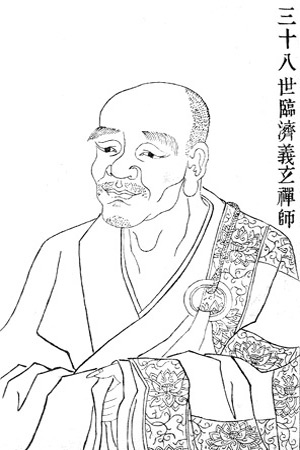 Huìzhào 慧照, Zhènzhōu Línjì Huìzhào chánshī yǔlù [The Recorded Sayings of Linji Huizhao of Zhen Province] 鎮州臨濟慧照禪師語錄語 (Taishō; 47/1985: 495-506; ZZ; 118:198b6-220b2).
Huìzhaò alias Línjì Yìxuán 臨濟義玄 (?-867). An early version of the text was first included in the Tiān-shèng guǎng-dēng lù (1036); afterwards it was included in the Sì-jiā lù 四家錄 (1120) and began to circulate as independent text in 1120. Also contained in fascicle 4 and 5 of the Gǔ-zūn-sù yǔ-lù 古尊宿語錄 ). Tr. in Sasaki 1975 and Watson 1999. See also Sasaki 1973 and Demieville 1970. This is probably the most difficult text of the Recorded Sayings genre. There is a gap of ca. 200 years between the death of Linji and the first edition of his records; the work is therefore a doubtful source for the vernacular language of the 9th century but rather reflects the language of the early 11th century (see Wittern 2002: 128).

Compiled by Hui-ran 慧然 (Jpn.: Enen)
(Taishō No. 1985)
Ch.: Zhen-zhou-lin-ji-hui-zhao-chan-shi-wu-lu
Eng.: The Recorded Sayings of Linji
(In BDK English Tripiṭaka 15 “THREE CHAN CLASSICS”)
This work, generally known as “The Record of Lin-ji,” is a record of the teachings of Lin-ji Yi-xuan (Jpn.: Rinzai Gigen), the founder of the Lin-ji branch of the Chan (Jpn.: Zen) School, and was compiled by one of his disciples, Hui-ran. In the Lin-ji (Jpn.: Rinzai) School it is regarded as the most important collection of the recorded sayings of a Chan Master.
Zhen-zhou in the title is the name of the prefecture, and Lin-ji the name of the place where Lin-ji resided; Hui-chao Chan-shih (Chan-shih: ‘Chan Master') is the title conferred upon him posthumously by the Tang emperor.

2. The same sermon, translated by D. T. Suzuki, in Essays in Zen Buddhism, Third Series (London: Rider & Company, for the Buddhist Society, London, 1953), pp. 47-53. Both of the above are, in the opinion of this compiler, flat and pedestrian translations of a vigorous and powerful text.

PDF: The Zen Teaching of Rinzai: The Record of Rinzai Translated by Irmgard Schloegel

HTML: The Record of Linji Translated by Ruth Fuller Sasaki (no footnotes)

The Linji lu (Record of Linji) has been an essential text of Chinese and Japanese Zen Buddhism for nearly a thousand years. A compilation of sermons, statements, and acts attributed to the great Chinese Zen master Linji Yixuan (d. 866), it serves as both an authoritative statement of Zen's basic standpoint and a central source of material for Zen koan practice. Scholars study the text for its importance in understanding both Zen thought and East Asian Mahayana doctrine, while Zen practitioners cherish it for its unusual simplicity, directness, and ability to inspire.

One of the earliest attempts to translate this important work into English was by Sasaki Shigetsu (1882-1945), a pioneer Zen master in the U.S. and the founder of the First Zen Institute of America. At the time of his death, he entrusted the project to his wife, Ruth Fuller Sasaki, who in 1949 moved to Japan and there founded a branch of the First Zen Institute at Daitoku-ji. Mrs. Sasaki, determined to produce a definitive translation, assembled a team of talented young scholars, both Japanese and Western, who in the following years retranslated the text in accordance with modern research on Tang-dynasty colloquial Chinese. As they worked on the translation, they compiled hundreds of detailed notes explaining every technical term, vernacular expression, and literary reference. One of the team, Yanagida Seizan (later Japan's preeminent Zen historian), produced a lengthy introduction that outlined the emergence of Chinese Zen, presented a biography of Linji, and traced the textual development of the Linji lu. The sudden death of Mrs. Sasaki in 1967 brought the nearly completed project to a halt. An abbreviated version of the book was published in 1975, but neither this nor any other English translations that subsequently appeared contain the type of detailed historical, linguistic, and doctrinal annotation that was central to Mrs. Sasaki's plan.

The materials assembled by Mrs. Sasaki and her team are finally available in the present edition of the Record of Linji . Chinese readings have been changed to Pinyin and the translation itself has been revised in line with subsequent research by Iriya Yoshitaka and Yanagida Seizan, the scholars who advised Mrs. Sasaki. The notes, nearly six hundred in all, are almost entirely based on primary sources and thus retain their value despite the nearly forty years since their preparation. They provide a rich context for Linji's teachings, supplying a wealth of information on Tang colloquial expressions, Buddhist thought, and Zen history, much of which is unavailable anywhere else in English. This revised edition of the Record of Linji is certain to be of great value to Buddhist scholars, Zen practitioners, and readers interested in Asian Buddhism.

The Book of Rinzai (Linji) contains the recorded sayings of Zen Master Rinzai, translated and presented here by Eido Shimano Roshi. The text proper consists of a series of predictions: Ascending the High Seat (Shangtang), Teaching the Assembly (Shizhong), Cross-examinations of Linji with his students (Kamben), and Records of Pilgrimages (Xinglu).

PDF: The Sayings of Zen Master Linji Yixuan
English-Vietnamese edition. 2011. Compiled by Thích Nữ Thuần Bạch.
English translation from the Chinese by Eido T. Shimano, from the The Book of Rinzai (Zen Studies Society Press, 2005).
The Vietnamese translation, from the Chinese, is from my headmaster, the Most Venerable Thích Thanh Từ. I have translated the English foonotes of Eido T. Shimano into Vietnamese and added my commentaries in English and Vietnamese.

The Record Of Linji: A New Translation Of The Linjilu In The Light Of Ten Japanese Zen Commentaries
by Jeffrey L. Broughton with Elise Yoko Watanabe
Oxford University Press Inc, 2012, 336 p.

The Linjilu (Record of Linji or LJL) is one of the foundational texts of Chan/Zen Buddhist literature, and an accomplished work of baihua (vernacular) literature. Its indelibly memorable title character, the Master Linji—infamous for the shout, the whack of the rattan stick, and the declaration that sutras are toilet paper—is himself an embodiment of the very teachings he propounds to his students: he is a "true person," free of dithering; he exhibits the non-verbal, unconstrained spontaneity of the buddha-nature; he is always active, never passive; and he is aware that nothing is lacking at all, at any time, in his round of daily activities. This bracing new translation transmits the LJL 's living expression of Zen's "personal realization of the meaning beyond words," as interpreted by ten commentaries produced by Japanese Zen monks, over a span of over four centuries, ranging from the late 1300s, when Five-Mountains Zen flourished in Kyoto and Kamakura, through the early 1700s, an age of thriving interest in the LJL. These Zen commentaries form a body of vital, in-house interpretive literature never before given full credit or center stage in previous translations of the LJL. Here, their insights are fully incorporated into the translation itself, allowing the reader unimpeded access throughout, with more extensive excerpts available in the notes. Also provided is a translation of the earliest extant material on Linji, including a neglected transmission-record entry relating to his associate Puhua, which indicate that the LJL is a fully-fledged work of literature that has undergone editorial changes over time to become the compelling work we know today.

This re-issue of Nothing to Do, Nowhere to Go: Waking Up to Who You Are, originally published in 2007, is lightly edited, re-titled, re-designed, and refreshed.

"Master Linji taught in order to shake things up. He wanted to smash obstacles, heal sickness, and undo fetters. Reading his words is like taking a very strong medicine. Most of us tend to think that if we take vitamins or tonics, we'll feel healthier. But sometimes, rather than taking anything more into our bodies, we need to clean them out. That's when we need a good dose of the teachings of Master Linji. They aren't vitamins, they're laxatives.The purpose of Master Linji's work is to help us cease all our seeking and come back to ourselves in the present moment. That's where we can find everything we're looking for, whether it's Buddha, perfect understanding, peace, or liberation." Thich Nhat Hanh.