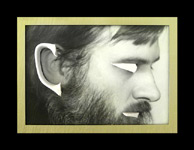 The cup falls to the ground,
The sound sharp and distinct.
The universe is shattered;
The crazed mind calms.

A cup is broken to pieces; I had knocked it off the shelf. Angry with myself for being so clumsy, I set to sweeping up the useless shards and throwing them in a bin. While looking at how far they had fallen, instead of feeling guilt, I find myself admiring the spectacle. The broken cup can always be substitued by another, whole, mass-produced one, but these fragments are irreplaceable. Their shape, their position is unique, never to be repeated.

If this little accident had been filmed, I would have a documentary. As it is, I could film only the final outcome. Or, why couldn’t I keep the pieces as they are? They would at least preserve the event in three dimensions. I could call the whole lot documentary ceramics. After all, sociography and documentary literature do not themselves aspire to more than recognizing the form of the material as it is found.

Why couldn’t the art of ceramics have clay for raw material in any state and quality, without exception and condition? Why couldn’t it be fired clay, finished ceramics? Something I can chip, break, grind, cement, re- or overfire? Nothing has a final shape – broken ceramics advertise, and also – it is the part that makes the whole; it is absence that makes presence what it is.

Of course I had no intention of creating any documentary. But with my unexpectedly clumsy move I did not only ruin something practical, I also created something else: a ceramic object fallen apart. Unintentionally. This is a negative work of art. In a material sense it is useless, like a rotten or worm-eaten apple, yet in a spiritual sense it is not by far. Is it then genuine art which glorifies our conquest of matter, that acclaims a perfect realization of our ideas, yet buries all traces of our failure together with the waste? Competitions, exhibitions, publications and trade can very well do without failures, but can we?

Of course ceramics break easily. But why couldn’t this disadvantage be made into an advantage and be used to make form as naturally as coiling, throwing and slip casting?

When I was a child I often found it fascinating to watch how the neighboring bricklayer went about splitting bricks: first he took his time to knock the brick with the hammer’s edge, then he put the brick on his palm and hit it. Surprisingly, it split more or less where he wanted it to. Still, I do not want to rival the bricklayer; I don’t want to be an expert in splitting. I simply set out to see what it would be like and not to see what I had imagined.

I take a brick into my hand. Its surfaces are smooth and regular: it preserves the behavior of the wet clay extruded and cut up. I could say it imitates its alienated self as ice imitates water frozen into form. If it is broken, the breakage reveals its nature changed in the fire. It breaks the structure so the brick cannot function as a brick any more. It is no longer a thing for use, but either a sculpture or just waste.

Ceramics broken by accident are ceramics without craftmanship, their technology is the absence of technology, a negation of both knowledge and ignorance.

Fragments formed by hitting or dropping seem implacably rigid and incalculably capricious – they are not to come up to our expectations, they can show our desires only approximately. They have a style of their own and we have to let them speak. As breaking regards the original object as raw material, the value of the broken object has nothing to do with the value of the original. Its value is ruined, anyway. Broken kitsch is like an operated patient.

The unavoidable duality of the original and the object broken from it would be artificial to make from wet clay. There we always have carte blanche, we have to make the shapeless mass into a new world; here the dialogue goes on with the existing world.

Breaking ceramics is irreparable. Greenware, as long as it is damp, can always be modified, corrected, reshaped, while breaking is an irreversible process. I can only go on breaking what I have broken into smaller and smaller pieces (it is impossible to break in another way or to break anew) until I have smashed the whole. Then there is no more. Stone which disintegrated into dust through millions of years and was fired into stone again for a moment, is dust again.

Breakage has always been taboo in the art of ceramics. Perhaps it was the loss of practical value of broken crockery which repelled us. Of course, museums cherish old and rare pottery fragments unearthed by excavation. In Hungarian peasant houses, cracked or chipped pots were used after repair, either to save money or because people were attached to them. A jug with a hole at the bottom might be used for watering flowers; a cracked pot, held together by a piece of wire, for storing something; chipped plates to feed the dog or the chickens; broken pieces might be toys for children.

Shards were used when making adobe walls or building fireplaces. But it was only the exception that confirmed the rule that we regarded something broken as of equal value with the intact, like Hon’ami Koetsu’s tea bowl mended with gold lacquer, or Peter Voulkos’s plate repaired with epoxy-resin. Apart from Robert Arneson’s installation of smashed selfportraits, it is only outside the art of ceramics that we sometimes meet shards combined with other materials in mixed-media, high-art objects, like broken plates (Julian Schnabel), mugs and saucers (Martha Holt) or tiles (Jean-Pierre Raynaud).

Well, it might be a pleasant diversion during our Sunday walk to search heaps of solid or hollow broken bricks, wall or floor tiles, broken crockery. We might as well put them into museums to save future generations the trouble and expense of excavations. They tell more about the age than present-day nonfunctional ceramic art which pretends to depict it, yet either feeds us the nostalgia of man alienated from nature, through organic forms, mud, earth, stones, tree trunks, leaves, buds, cells; or the nostalgia for order, through minimal geometrical forms, man’s barren order against the contingency of nature. But the utopia made of asphalt and concrete seems to be dwindling away and there is no way back to nature. Where is it? Overindustrialization, trash, junk, garbage, waste and dirt in quantities impossible to dispose of or digest overgrow the cities like cancer. 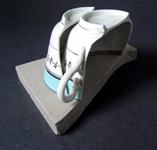 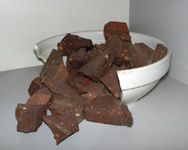 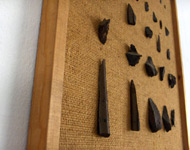 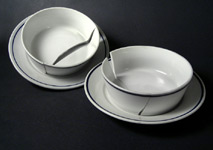 It is not really easy to do away with the waste of our ceramics production and consumption; it is not worth recycling like iron and metals, paper, cloth and glass. We meet it every day wherever buildings are put up or pulled down and we produce it ourselves. Ceramics to be broken do not need looking for; they cannot go unnoticed. It is really superfluous to fire clay (using expensive energy), there is enough fired already. Whether we break them ourselves or not, there are always lots of broken ceramics about (as it is unnecessary to fire, so it is to break), and all of them are excellent. There is no conflict between what is and what should be. Anyway, breakage does not do anything but make visible the unnoticeable cracks born of tensions during forming, drying and firing.

If we go on looking, not only at construction sites or demolitions but at the wasteheaps of brick and porcelain factories and potters’ workshops, we shall find one other monster: overfired clay. While carved stone and wood represent nature conquered, bricks molten together are man conquered. Chafed or damaged greenware can be slaked again, underfired pottery can be refired, faults in the glaze can be corrected, but these two – overfired and broken pottery – are final, unimprovable waste. 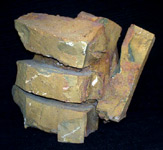 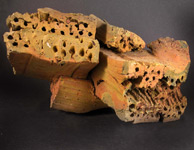 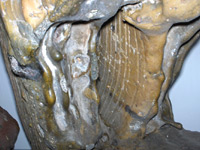 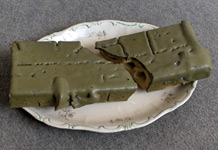 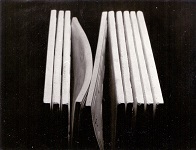 The art of waste doesn’t destroy, it uplifts what industrial society has discarded. Everyday objects exhibited as works of art to provoke (as in Marcel Duchamp’s ready-mades) are made into individual pieces from mass products by the very act of exhibition. Waste, on the other hand, is everyday objects ruined by accident; it is malignant and irrational and unique, whether exhibited or not. It may only become an example but never a sample. Failure is its success because if it had succeeded, it would have remained a nameless mass product. When the worker happens to violate regulations and produces not a mass product – if he knocks a cup off the conveyor belt, forgets to switch off the kiln – he then never repeats himself, never imitates and instead of producing, he unwittingly starts creating. "Fine arts came to an end in the age of technical reproducibility," states Walter Benjamin, though it is exactly technical reproducibility which best allows for the art of waste. So far the artist has been going to factories to make use of the tricks of up-to-date industrial technology, but perhaps the blunders of industrial technology are also useful for him. As in the case of finishing, maker and artist are separete. But here the situation is reversed. The object is finished before the artist has learned about it. We might call it "art after creation."

Waste refutes the argument that new form is made only on designers’ tables. The industrial designer guards only official changes. Waste also refutes that only a good artisan makes a good artist.

In the case of waste it never happens that the maker masks falsity and shallowness by knowledge and crafsmanship. Of waste we cannod demand self-expression. We have to consider the attitude of the finder, who gives up his skill and equipment, leaves his workshop or design office; who works not isolated, under experimental circumstances but under natural, industrial ones; happens to notice what rat-race society wants to forget about. He does not construct but discovers; does not look for sensual pleasure in refined artistic objects but accepts even the rejected for what it is; looks for useless things at the waste heap at a time when everything has become a commodity, and listens to the words of unmarketable objects which are not only free but a burden for everybody else. "What’s the most valuable thing in the world?" asks the Zen Buddhist monk. "A dead cat," the Zen master answers. "Why?" "Because nobody values it."

It is not art that makes man great but man that makes art great. The art object is only rubble along the road as he passes on. Waste is a product of mans’s hand which has lost its original message; it has no age, no patina, no atmosphere recalling another age. It only preserves an accident, therefore it lacks human trickery and speculation; it does not cheat, it does not lie. It does not stand for anything even though man’s frustrated purposes gleam through when we see it. Waste is our vain efforts, wasted energies and time, objectified. We could settle its fate with a wave of the hand, until as Friedrich Durrenmatt writes in Traps: "a screw gets loose, a coil goes wrong, a button fails and there is a short circuit, a wrong connection, the end of the world. So there is no more… justice, no fate as in Symphony No. 5, only traffic accidents… dams bursting through technical mistakes, atom bomb factories blowing up through the absent-mindedness of laboratory assistants."**

Waste is the metaphor of our age, the model of derailments due at any moment.

* “The editors of Ceramics Monthly feel unanimously that you have a prodigious writing talent and a unique viewpoint.” (October 17, 1980, William C. Hunt, Managing Editor)

** A Dangerous Game is a 1956 novel by the Swiss writer Friedrich Dürrenmatt (1921-1990). Its original German title is Die Panne, which means "The breakdown". It is known as Traps in the United States.