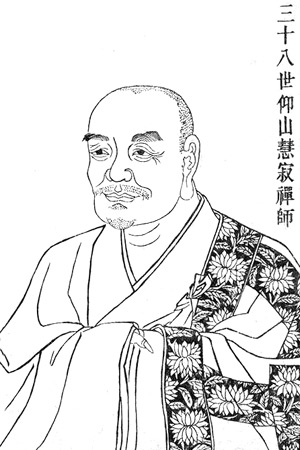 Encounter Dialogues of Yangshan Huiji
compiled by Satyavayu of Touching Earth Sangha
DOC: Treasury of the Forest of Ancestors

Master Yangshan Huiji was from Shaozhou in the south (in modern Guangdong Province). He became a novice at a young age, and while still a teenager he became determined to follow the Zen path, and so headed north to visit the renowned elder masters in Jiangxi and Hunan.
The first teacher that he studied with was the aging Master Danyuan Yingzhen, who had been the main disciple of the legendary Master Nanyang Huizhong. After leaving Danyuan, Huiji traveled to Mt. Gui in Hunan where he met Master Guishan Lingyou.

When Huiji first arrived at Guishan, the master asked him, “As a novice, do you have a master or not?”
Huiji said, “I have one.”
The master asked, “Who is it?”
Huiji walked from west to east, then stood still.
The master realized that Huiji was an unusual youth.

When Huiji was still a recent arrival at the monastery Master Guishan asked him, “I hear that you could give ten answers to one question when you were studying with Master Danyuan. Is that true?”
Huiji said, “Not at all.”
The master asked, “How do you say one phrase that goes beyond the teaching of Awakening?”
Just as Huiji was about to speak, Guishan shouted. The master asked the question two more times, and each time he shouted before Huiji could speak.
Finally, Huiji's eyes teared up, and he said, “My late master told me that when you meet a genuine person, you will be able to realize. Today I have met a genuine person.” Then Huiji decided to go up the mountain and focus on sitting in solitary retreat.

One day when Master Guishan was walking on the mountain, he saw Huiji doing sitting practice under a tree. The master tapped Huiji on the the back with his staff. Huiji turned his head, and Guishan asked, “Huiji, can you say it?”
Huiji replied, “Although I cannot say it, I will not depend upon someone else's mouth.”
The master approved.

Once when Huiji came back from working on the rice field, Master Guishan asked, “Is the rice ready to be harvestesd?”
Huiji replied, “It's ready.”
The master asked, “Do the rice plants appear to you to be green, yellow, or neither green nor yellow?”
Huiji said, “Master, what's behind your back?”
The master said, “Do you see it?”
Huiji raised up a bundle of rice plants and said, “Aren't you asking about this?
The master approved.

Once Master Guishan was sitting silently with Huiji beside him as attendant. When he finished, the master said, “Huiji, you have recently been recognized as a successor in our tradition. How did that happen? Many monks are wondering about this. How do you understand it?”
Huiji said, “When I'm sleepy I close my eyes and rest. When I'm feeling fine I sit upright. I haven't ever said a thing.”
The master said, “To achieve this understanding is no easy matter.”
Huiji said, “In my understanding even attaching to this phrase is a mistake.”
The master asked, “Are you the only one who doesn't speak about it?'
Huiji said, “From ancient times until now, all the sages were just like this.”
The master replied, “There are some who would laugh at that answer.”
Huiji said, “The ones who would laugh are my colleagues.”
The master then asked, “How do you understand succession?”
Huiji got up and walked a circle around the master.
The master said, “The succession passed uninterruptedly from ancient times until now has just been broken.”

Huiji had a close bond with Master Guishan, and became his most prominent disciple. But during his training with his main teacher, even while still quite young, he often made excursions to check out other teachers.

After Mazu’s passing, many students parroted his phrase, “This very mind itself is Buddha.” Master Dongsi criticized this, saying, “Where is this dwelling of Buddha that is called ‘this very mind’? Mind is the painter of the world, why call it ‘Buddha’? Mind is not 'Buddha', 'Wisdom' is not the way. The sword is long gone (sunk into the water) yet you all cut notches into the boat (to remember where it was lost).”

Dogen said:
“What is this jewel?” Then he drew a circle with his whisk and said, “Isn’t this it?”

After Huiji had finished his training with Master Guishan and had spent some time traveling, he began to teach at a monastery called Dongping (Eastern Peace). An elder disciple of Guishan’s named Mihu (who, with a name that means 'Foreigner Mi', and with his full beard, was likely from Central Asia), was teaching in the capital. He sent a monk to check out Huiji with the question, “These days, is there still authentic awakening or not?”
Huiji responded saying, “It’s not that there’s no awakening, but how can we deal with falling into the secondary?”
The monk returned and reported this to Master Mihu, who deeply approved.

Early in his career at Dongping, Huiji received a letter and a mirror from Master Guishan. During a talk he held up the mirror and said, “Master Guishan has sent a mirror. Tell me, is this Gushan’s mirror or Dongping’s mirror? If you say it’s Dongping’s, I say Guishan sent it. If you say it’s Guishan’s mirror, I say it’s in Dongping’s hand. If you can say a word, I’ll keep it. If you can’t, I’ll destroy it.”
Huiji asked two more times, but no one in the assembly responded. So Huiji struck the mirror.

One day a monk asked Huiji, “What’s the difference between heaven and hell?” Huiji drew a line in the ground.

Eventually Huiji moved his community to Mt Yang in the Yuanzhou region of Jiangxi Province. Here his reputation spread and attracted students from all over China.

Once Master Yangshan Huiji ascended the hall and addressed the assembly saying, “All of you, turn the light on yourself. Don’t try to remember what I’m saying. From beginningless time you have turned your attention away and remained in darkness. The roots of delusion are deep - difficult to uproot. So the Awakened One established expedient means to grab your attention - these are like showing yellow leaves to a crying child, who believes they’re gold and stops crying. Do you believe Master Shitou had a real gold shop? In my shop I have a whole range of goods. If you come looking for mouse turds, I’ll give you some; If someone comes looking for real gold then I’ll give that.”
A monk came forward and said, “I don’t want more mouse turds. May I have the master’s real gold?”
Yangshan said, “If you try to bite down on the head of a flying arrow, you can try till the year of the ass, but you won’t succeed.”
The monk said nothing.
Yangshan said, “If you want to exchange something we can make a deal. If you don’t want to exchange anything then we can’t.”

Once a monk asked Master Yangshan, “Does our 'Truth-body' understand a true discourse?”
Yangshan said, “I can’t speak about it, but someone else can?”
The monk asked, “Who is the person who can?”
Yangshan pushed forward a cushion.

Just as Master Guishan had taken an interest in teaching women, and had at least one woman disciple who became a master (Liu Tenmo), Yangshan also supported the training of women. He took the unusual step of appointing a nun named Miaoxin to be guest manager, an important office in a large training monastery. In this role she was once taking care of the housing of a large party of seventeen visiting monks, when she overheard them discussing the story of Master Huineng and the flag. She was able to bring insight to all of them at once by her famous utterance, “It’s not the flag, nor the wind, nor the mind that is moving.”

Master Yangshan. like most teachers, also taught laypeople. The officer Lu, who had visited Master Guishan, came to Yangshan after having some insight on reading a scripture.
Master Yangshan asked officer Lu, “I hear that you’ve achieved awakening by reading a scripture. Is this true?”
Lu said, “Yes, master. When reading the Nirvana Sutra, it was the line, ‘Without cutting off desire, enter nirvana.’”
The master held up his whisk and said, “How can this enter nirvana?”
Lu said, “There is no need for even the word ‘enter’”
The master said, “‘Entering’ is not for you.”
Lu stood up and left.