The 30 by 34 meters building made of Japanese cypress was constructed in 1915 as a drawing room where the chief priest of the Temple always meet with VIPs. Making this hall famous are the pictures painted on the Japanese sliding doors by such notable artists as Tetsu-en Sakuma (1850-1921), Shuho Ikegami (1874-1944) and Michihiko Tsubata (1868-1938), who was patronized by the imperial household. Shi-un is literally purple clouds and in the Jodo Sect, it is believed that the Amitabha Buddha come down to the adherents' death bed to lead them to the Pure Land Paradise. Anyhow, the purple clouds are the symbols of auspiciousness to the Buddhists. Though Buddhist temples are not always engaged in a wedding ceremony, here the Temple performs it for the parishioners in Buddhist fashion in this auspicious hall. Unsui Statues 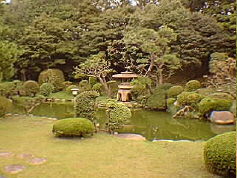