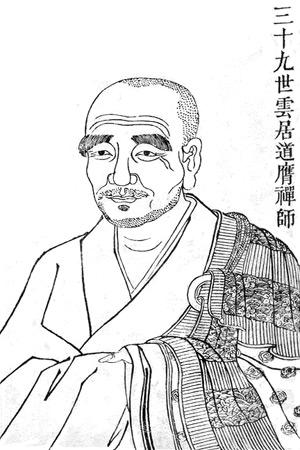 YUNJU DAOYING (d. 902) was a disciple and Dharma heir of Dongshan Liangjie. He came from ancient Youzhou (located in modern Hubei Province). At the age of twenty-five he took the monk’s vows at Yanshou Temple in Fanyang (now in Zhuo County, Hebei Province). It is recorded that as a young man he was versed in the Vinaya. Later he made his way to Mt. Nan where he studied under Zen master Cuiwei Wuxue. Hearing of Dongshan’s reputation, he proceeded to Mt. Dong to study with him. Dongshan later allowed him to lead other monks of the temple. After leaving Dongshan, he first lived at “Three Peak Hermitage,” and later established Jenru (“True Thusness”) Temple on Mt. Yunju (northwest of modern Nanchang City in Jiangxi Province). He taught at this site for more than thirty years, and his congregation’s size reached up to fifteen hundred people.

Dongshan asked Yunju, “Where have you come from?”

Dongshan said, “What teaching does Cuiwei convey to his disciples?”

“Cuiwei said, ‘Aren’t you able to eat every day?’”

Dongshan said, “Did he really say that or not?”

Dongshan said, “Don’t dismiss it when a great man appears!”

Then Dongshan asked Yunju, “What is your name?”

Dongshan said, “Look up and then say it.”

Yunju said, “If I look up, then there’s nothing named ‘Daoying.’”

Dongshan said, “You talk just like I did when I spoke with Daowu.”

Yunju asked Dongshan, “What was the First Ancestor’s intention?”

Dongshan answered, “Behind him was a reed hat.”

Dongshan asked Yunju, “If suddenly a monk asked, ‘Your Reverence?’ How would you answer?”

Once, Dongshan said to Yunju, “I heard that a monk named ‘Great Thought’ was reborn in the Kingdom of Wei and became the king. Is this true or not?”

“If his name was ‘Great Thought,’ then even the Buddha couldn’t do it.”

One day Dongshan asked, “Where are you going?”

Yunju said, “Tramping on the mountain.”

Dongshan said, “How can the mountain endure?”

Yunju said, “How can it not endure?”

Dongshan said, “If you go on like this, then you’ll eventually teach the whole country.”

Dongshan said, “If you go on like this, then your disciples will gain a way of entrance.”

Dongshan said, “No such way? I challenge you to show me.”

Yunju said, “If there’s such a path, then I’ll leave you immediately to go on it.”

Dongshan said, “In the future, a thousand or ten thousand people won’t be able to grab this disciple.”

Yunju was crossing a river with Dongshan.

Dongshan said, “How deep is it?”

Yunju said, “What would you say, Master?”

Zen master Nanquan once asked a monk, “What sutra are you reading?”

The monk said, “The Rebirth of Maitreya Sutra.”

Nanquan said, “When will Maitreya be reborn?”

The monk said, “Now he’s in Tushita Heaven. He’ll be reborn in the future.”

Then Dongshan said, “Worthy Ying! When I was at Yunyan’s I once asked him something and he shook the stove. Today, when you asked me this question, my entire body broke out in a sweat!”

Yunju built a cottage on nearby Sanfeng peak. For ten days thereafter he didn’t return to the monk’s hall.

Dongshan asked him, “Why haven’t you come to meals lately?”

Yunju said, “Every day a heavenly spirit brings me food.”

Dongshan said, “I say you’re a person. Why do you still have such an understanding? Come see me tonight!”

That evening when Yunju came to see Dongshan, Dongshan called out to him, “Hermit Ying!”

Yunju went back to his cottage and sat in Zen meditation. Because of this the god couldn’t find him, and after three days did not come again.

Yunju entered the hall and addressed the monks. He quoted an ancient teacher, saying, “‘Hell is not a great misery. The greatest misery is to wear these clothes but not understand the great matter.’ You here who have embarked on this undertaking, you’ve gone only nine-tenths of the way. If you show a little more spirit, then you monks won’t spend your whole life on pilgrimage and you won’t forsake our order. An ancient said, ‘If you take on the responsibility of this affair, you must stand on top of the highest peak, and you must walk on the bottom of the deepest ocean, then you’ll have a disciple’s resolution.’”

A monk asked Zen master Yunju Daoying, “What is the one Dharma?”

Yunju said, “What are the ten thousand dharmas?”

The monk said, “I don’t understand how to comprehend this.”

Yunju said, “The one Dharma is your own mind. The ten thousand dharmas are your fundamental nature. Are they one thing or two?”

Yunju showed the monk a poem that said:

The single Dharma is the essence of all dharmas.
The myriad dharmas penetrate the one Dharma.
“Mind-only” and “nature-only,”
Don’t say they’re different or the same.

A monk asked, “What is the place of the transcendent path?”